From Wheat to Wine: The Story of REININGER Winery's Growth in the Walla Walla Valley

Twenty years ago, Chuck Reininger and wife, Tracy Tucker, opened the doors to Walla Walla’s first winery dedicated to the Valley’s fruit. REININGER Winery opened in 1997 with a lineup of Bordeaux–style wines sourced from some of the Valley’s oldest vineyards: Pepper Bridge and Seven Hills. 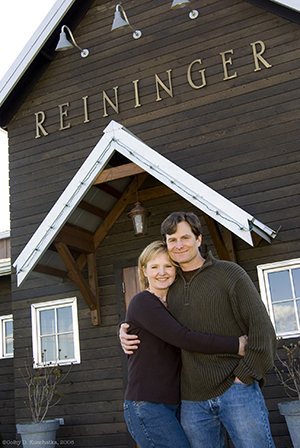 A Bellevue native, Chuck was passionate for nature and adventure. Prior to winemaking, he was a mountaineering guide for Mt. Rainier, but when he moved with Tracy back to her hometown of Walla Walla, he hung up his ice axe and started helping long time friends at Waterbrook winery with their harvest. By 1993 he had fallen in love with wine and began venturing into home winemaking. With home winemaking experience behind them, the Reiningers mustered up the courage to launch the dream adventure.

At the time, REININGER Winery was the only winery located at the airport, but today the retired Army Air Corp base is home to more than 20 wineries.

As the tenth bonded winery in Walla Walla, REININGER has helped grow the Valley and establish it as a serious winemaking region.

During the past 20 years, REININGER Winery has gained international acclaim on varietals such as Cabernet Sauvignon, Carmenère and Syrah.

The success of REININGER Winery has not been a solo journey for Chuck and Tracy. In 2003, Tracy’s parents, Ronnie and Terry Tucker, and brothers, Kelly and Jay Tucker, partnered with Chuck and Tracy.

As fifth generation dryland wheat farmers in the Pacific Northwest, the Tuckers were not new to the agricultural industry, and the Tuckers had experience in the wine industry before their involvement in REININGER Winery. Starting in the 1980s, Ronnie & Terry were investors in Canoe Ridge Vineyard and Winery and have since invested in Forgeron Cellars. Tracy’s brother, Kelly, was the CFO for Hogue Cellars for 16 years prior to becoming a partner in 2003.

The partnership of the Tucker family with REININGER Winery has helped the company expand the business through two additional brands, Helix and CPR.

It was imperative to Chuck and Tracy that the REININGER brand honor and preserve the Walla Walla Valley’s heritage as well as the Tucker family’s agricultural roots in the Valley.

“It was my instinctual demand to require that our wines reflect our home, our valley, “Chuck explains. “The French refer to this as ‘terroir’, meaning a sense of place, a concept I was ignorant about when we started REININGER. I was just a fool in love with Mother Nature,” he exclaims.

As farmers who settled in the Pacific Northwest via the Oregon Trail, Helix is the result of the Tucker family’s dedication to the Columbia Valley’s distinctive terrain, climate, and soil type.

Named for a farmstead in Helix, Oregon, Helix Wines was created as a way to explore the 11 million acres that make up the diverse, unbounded Columbia Valley. The family hopes to share their passion for discovery, and maintains a mission of educating the world about what is possible from Washington wines.

Kelly Tucker, Partner and General Manager of the winery, explains: “Every wine we make is high quality, and we’ve been doing it long enough to work with the most established vineyards and growers in the state.

“We love making wine, and we love telling stories about our wine,” Kelly adds. “We work hard to give our customers a tangible tasting room experience that goes above and beyond their expectations.”

The first release under the Helix label was a 2002 Bordeaux/Syrah blend called ‘Pomatia.’ With the conviction of continuing to source fruit from the Columbia Valley, and Kelly Tucker’s connections made from his time at Hogue Cellars, the company grew to producing 2,000 cases of wine a year and exceeded the limit of the tiny “shackteau” at the airport.

A larger facility was needed if they were to keep producing two brands, so the family made the decision to purchase eight acres of land on what is now OId Highway 12 six miles west of Walla Walla. The property included two large red barns. Following a lengthy re-design project in which the two barns were joined into one building, the 15,000-square-foot tasting room and production facility opened in 2004. 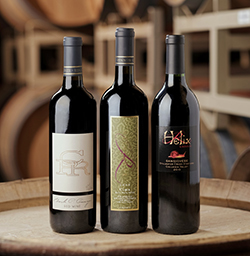 In 2014, REININGER debuted its third label, CPR. Named for Charles Phillip Reininger, CPR is what the Reiningers refer to as their “No Boundaries” Collection. Unrestricted by AVA, the CPR brand constitutes four special project releases made only from the best fruit in the state. The winery now produces 8,000 cases of wine a year.

In the winter of 2018, the winery expects to release two new wines under the CPR label — the third edition of a nonvintage red blend and a 100% Cabernet Franc sourced from XL vineyard in the Walla Walla Valley.

Although much has changed since REININGER’s first vintage, including the introduction of the Helix and CPR brands, plus the 2017 opening of a Helix tasting room in Spokane, Chuck Reininger’s winemaking style and elevage remains consistently devoted to capturing the essence of each vintage and varietal in every wine that he produces.

In fact, this past summer at the 2017 Decanter World Wine Awards, REININGER’s Walla Walla Valley Syrah was recognized as the “Best USA Red Rhône Varietal” and recipient of a 95-point score.

The same wine won medals at the 2017 Great Northwest International Wine Competition, the Seattle Wine Awards and was recognized by Wine Enthusiast as one of its top Syrah wines of 2017.