Winemaker, Chuck Reininger, describes his Northern Rhone style Syrah as a “merging of Old World style and techniques with the hidden depths of New World fruit.”

“We co-fermented this wine with Viognier skins in small, open-top 1.5 ton stainless steel fermentation tanks, and then we barrel aged it in 100% neutral French oak for just under two years. We never want to mask the identity of the Syrah under layers of new, angular spicy oak. Instead, we try to highlight the beautiful, natural nuances that define Syrah's true character. 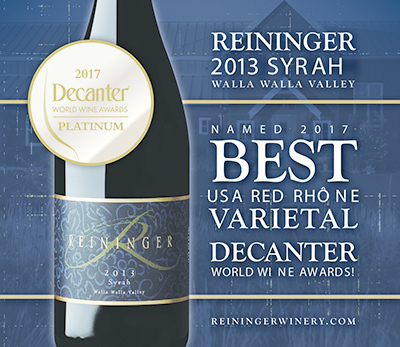 Both Pepper Bridge and nearby Seven Hills Vineyard sit atop ancient layers of the Touchet Beds. These slack water sedimentary deposits of sandy silt loam resulted from cataclysmic episodes of the largest glacial floods on earth, known as the Missoula Floods. Above the Touchet Beds lies a meter of wind-blown sandy silt loam known as loess. Pepper Bridge Vineyard’s higher clay content contributes nicely rounded tannins to its more floral and loamy Syrah while Seven Hills’ sandier soils provide a finer tannin structure to its blueberry and fleshy game Syrah.

“We believe that the soils of Pepper Bridge and Seven Hills Vineyards contribute to the subtle nuances of the pronounced classic Syrah character that is showcased in our 2013 vintage with a touch of that loamy minerality and earth. The grape has proved to be much more winter hardy than ever thought possible. The vines planted in Walla Walla show this unexpected will to live and thrive in the Valley.”

In 2013, the growing season began with a cool, wet spring followed by a warmer than usual summer, leading to an early harvest. A dramatic drop in temperatures happened the first week in September that extended harvest into early November and delayed the Syrah harvest by about two weeks. This allowed for more pronounced character development in the Syrah but also delivered a challenging high pH fruit.

Now in its 20th year, REININGER Winery has expanded to include its sister brand, Helix, and a special projects label called ‘CPR.’ Between the three labels, REININGER Winery produces 11,000 cases annually with 15 single varietals and seven red blends.